The City of Antioch is asking for your help to redraw new City Council districts!

Every ten years, local governments use new census data to redraw their district lines to reflect how local populations have changed. Assembly Bill 849 (2019) requires cities and counties to engage communities in the redistricting process by holding public hearings and/or workshops and doing public outreach, including to non- English-speaking communities.

The finalized maps that you will help us create will define the six City of Antioch district borders, and these new districts will impact how you elect your councilmembers for the next 10 years.
One criteria for developing election districts is to draw lines that respect neighborhoods and communities of interest. So we want to know: What do you consider the boundaries of your neighborhood? Who is your community, what brings you together, and where are you located?

The City Council will be holding hearings to receive public input on where district lines should be drawn. Share your specific thoughts, draw a map, or attend our workshop to get involved!

At the hearings and workshop, we want you to:

A community of interest is a “contiguous population that shares common social and economic interests that should be included within a single district for purposes of its effective and fair representation.” Communities of interest are the overlapping sets of neighborhoods, networks, and groups that share interests, views, cultures, histories, languages, and values and whose boundaries can be identified on a map.

What is the nature of the bond or common interest of your community?

Please describe what the common interests of your community are, and why or how they are important. For example:

Where is your community located?

Tell us where the exterior boundaries of your COI are so we can locate it on a map. For example, fill out the Antioch Written COI Form to write down landmarks, streets, bodies of water, or railroad tracks that indicate the location of the outside border of the community.

A map showing the location of the COI, along with oral or written testimony identifying the location, can be extremely helpful to locate the COI. Please see our instructions for “How to Create Your Community of Interest Online”.

Why is it beneficial for your community to be kept together in a district?

When you talk about your Community of Interest, consider explaining why it should be kept together in a district and why splitting it would be problematic. For example: 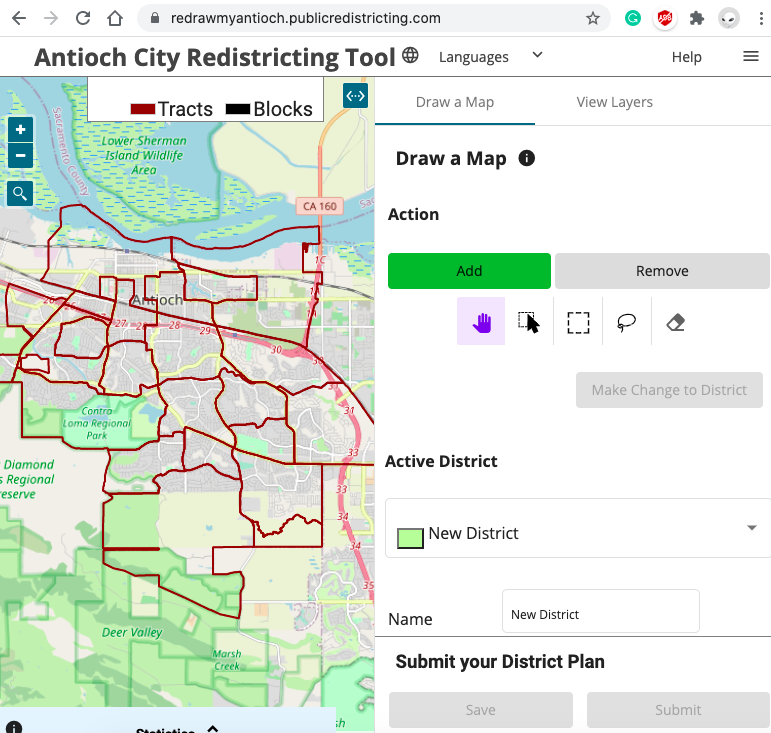 Through the City of Antioch’s Redistricting Tool, you can create redistricting plans while referencing the population data associated with each district in your plan. When you are finished, you can submit your district input directly to the Antioch City Council to be considered in the Redistricting process. Everyone who lives in Antioch is invited to participate!  https://redrawmyantioch.publicredistricting.com/

American Community Survey (ACS): A survey that releases data in four broad categories every year. The categories are: social, demographic, economic and housing. The ACS replaced the ‘long form’ of the census that was collected once every 10 years. The ACS does not report counts of the population but rather estimates.

By-District Election:  In a jurisdiction (for example, a city) with a by-district election system, the voters from each district vote for the candidates running for office in the voters’ respective district.  Elected officials and candidates must also live in the district that they represent or want to represent.

Census Block: The smallest level of census geography used by the Census Bureau to report census data. In urban areas, census blocks usually conform to city blocks, and in rural areas they are often delineated by other physical features and legal boundaries such as bodies of water and roads. Redistricting is based on census block level data.

Census Tract: A geographic area for which the census bureau releases data.  Census tracts are relatively permanent ‘units of analysis’ that are delineated for the purpose of presenting decennial census data. Census tracts usually contain between 2,500 and 8,000 people. Census tracts may be split by local jurisdictional boundaries.  Census blocks nest in census tracts.

Citizen Voting Age Population (CVAP): A variable collected by the American Community Survey that is used in Voting Rights Act assessments. The population that is 18 years and older and a citizen of the United States.

Compactness: Compactness often refers to a district’s shape and contours, focusing on how closely a district’s borders resemble a circle or square. When a district has ‘tentacles’ or oddly shaped borders, it is often said to be non-compact. In California, compactness in redistricting is defined as ‘not bypassing nearby population’ when constructing districts.

Cracking: A term used in Voting Rights that describes splitting significantly sized racial or ethnic communities into multiple districts, rather than keeping them together. Cracking is a particular problem when the division prevents the community from electing a candidate of its choice because it constitutes too small a portion of the electorate in the multiple districts.

Criteria for Redistricting: Rules established in the law that the redistricting body must follow when drawing electoral district boundaries. For example, one criterion is that districts have reasonably equal populations.

Districting: The process of creating equally populated electoral districts by using various criteria (such as Communities of Interest). In districting, electoral districts are created “from scratch” in a jurisdiction (a city for example) that does not currently have districts. Jurisdictions that do not have districts have “at-large” elections. Jurisdictions with districts redraw or adjust them (usually) every ten years after the release of the new census data to equalize the populations again. That process is called redistricting.

Equivalency File: A GIS file that shows the relationship between two geographic units. In redistricting, this file usually lists each census block in the dataset and indicates which district each block belongs to. The collection of block assignments is read by GIS software and displayed as district lines.

FAIR MAPS Act: Enacted in October 2019, the “Fair And Inclusive Redistricting for Municipalities And Political Subdivisions” is state law that addresses local redistricting for Cities and Counties in California. CA Elections Code Sections 21600 — 21609 specifically detail the process, criteria, and requirements for cities. The law increases transparency and public participation in the local redistricting process.

Ideal Population: The total population for the jurisdiction as reported by the Census P.L 94-171 dataset divided by the number of districts. The ideal population is the number of people that each district should contain when the redistricting process is complete.

Packing: A term used in Voting Rights that describes over-concentrating a significantly sized racial or ethnic community within one district when it could have been allocated between two or more districts in which would have had the ability to elect a candidate of its choice. Packing is a problem because over-concentrating a community in one district reduces or dilutes its ability to achieve fair representation in the legislative body in general.

Reasonably Equal Population: The redistricting criterion that implements the one-person, one-vote concept derived from the 14th Amendment to the US Constitution.

Redistricting: The constitutionally mandated redrawing of local, state, and federal political boundaries every ten years following the U.S. census. Redistricting is done to equalize the populations in the districts, using various criteria.

Redistricting Data (P.L. 94-171) Summary File OR ‘P.L. 94-171 Summary File’: The official name of the file that contains data used for districting and redistricting. Creation of this file, using data collected through the Decennial Census was mandated by Public Law 94-171. The P.L. 94-171 file reports basic demographic data for all people in the U.S. and is released on the census block level.

Section 2 (of the Federal Voting Rights Act): Section 2 of the Voting Rights Act (VRA) prohibits voting practices, policies, or procedures that have a discriminatory purpose or effect on racial or language minorities; this section applies nationwide and is a permanent provision of the VRA. To be in compliance with Section 2 of the VRA districts must provide voters with an equal opportunity to elect candidates of their choice.

Total Deviation: The difference between the lowest and the highest deviation of all districts.

Redistricting is the constitutionally mandated redrawing of local, state, and federal political boundaries every ten years following the U.S. census. Redistricting is done to equalize the populations in the districts, using various criteria. In Antioch, these boundaries determine which neighborhoods and communities are grouped together into a district for purposes of electing Councilmembers.

What criteria will our city council use when drawing district lines?

What are communities of interest (COI?

A community of interest is a “contiguous population that shares common social and economic interests that should be included within a single district for purposes of its effective and fair representation.” Communities of interest are the overlapping sets of neighborhoods, networks, and groups that share interests, views, cultures, histories, languages, and values and whose boundaries can be identified on a map.

What do the acronyms and categories mean on the demographic sheets?

Do we use the number of voters to draw districts?

Districts are drawn using the total population as counted by the last census. Everyone who was counted, irrespective of age, residency status or other demographics has to be assigned to a district. Districts are not equalized using voters, registered voters or citizens.

What Happens to The Drafted Maps?

After you submit your map, the demographic consultants will generate the population and other demographic details for your proposed map. Maps can be viewed on the Draft Maps page or on the Interactive Review Map. Once submitted, maps are considered public records.

Where Can I Learn More About Redistricting?

Online publications and guides to redistricting:

How can I get involved?

How can I stay connected?

Please send any questions, comments, and map suggestions to redistricting@antiochca.gov; or contact the City by phone at (925) 779-7000.

Sign up to get automatic notifications of upcoming meetings! www.antiochca.gov/notifications/

What happened at the public hearings in 2018? The hearings will be led by our districting consulting team are designed to be as accessible and transparent as possible. The hearings will have 3 phases. They will begin with a presentation to give an overview of the process and the criteria. After that, there will be an opportunity to mingle, study maps of the city and talk to the consultants and other residents to prepare input. Finally, the hearings will resume to allow for formal public input to be presented by attendees. The consultants will be able to show the area that the input focuses on using mapping software and a projector. The consultants will use the public input in constructing the draft maps.

Considerations made while drawing the Districts were drawn:

2018 Timeline: The districting process timeline is prescribed by the California Election Code. Section 10010(b) requires that 2 hearings, no more than 30 days apart, are held prior to the development of a draft map. In order to enable resident participation in this process, the City is holding a third public hearing at which draft maps will be discussed and the council will have an opportunity to make changes to the maps live and in public. Two additional hearings, no more than 45 days apart, are required after a proposed map has been drawn. The entire process has to be completed within 90 days after the City council passed the resolution of intent.

2020 City Council District Schedule: districts 1 and 4 elected council members for initial two-year terms. These districts will be up for reelection again in 2022, and after that every four years. Districts 2 and 3 will elect members for four-year terms in 2020 and continue to do so every four years thereafter. This is done to preserve staggered elections, i.e. to ensure that two seats are open every two years. The mayor’s position is not affected by district elections and will continue to be elected at-large, by all registered voters in Antioch.

September 23, 2021: Official Redistricting Data Base for the State of California would be released.