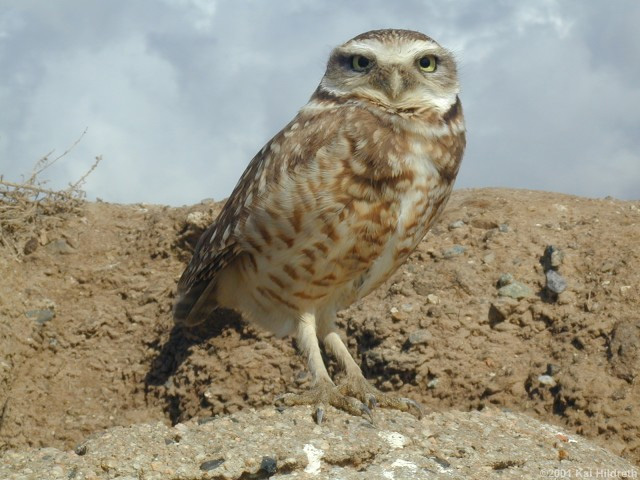 (Athene cunicularia)
The City of Antioch has established a 24-acre Burrowing Owl Habitat Preserve. Long term management of the preserve shall be funded through an endowment established by the city of Antioch. The habitat shall be fully protected from withdrawal/reallocation for other city uses.
This beautiful ground dwelling bird can be observed on the grasslands adjacent to Prewett Family Waterpark. The best time to observe the owls is at dawn or dusk. The males can often be observed standing in front of the burrows, especially during the breeding season.

The burrowing owl is federally protected by the Migratory Bird Treaty Act in the U.S. and Mexico, and is listed as endangered, threatened, or as a Species of Concern in nine states, including California, where it is considered a Species of Special Concern by the California Department of Fish and Game.

This owl is found in dry, open areas such as grasslands, farmlands, golf courses, and vacant lots in urban areas. It is broadly distributed throughout western North America, and also occurs in Florida, Central America, and most of South America.

Burrowing Owls primarily feed on insects and small mammals, but they will also eat reptiles and amphibians. Burrowing Owls hunt while walking or running across the ground and by swooping down from a perch or hover, and they will catch insects from the air.

Mating begins in early spring. Burrowing Owls nest in open areas in a burrow dug by other animals such as ground squirrels. Owls may nest alone or in a group. The female lays 6 – 11 eggs that are incubated for 28 – 30 days. The young owls fledge in 6 weeks, but stay in the parent’s territory to forage. Burrowing Owls may be sexually mature at 1 year of age.

The greatest threat to burrowing owls is habitat destruction and degradation caused primarily by land development. Despite their protected status, burrowing owls are often displaced and their burrows destroyed during the development process. The natural life span of the Burrowing Owl is 6-8 years.

The scientific name comes from the Greek word athene, referring to the Greek goddess of wisdom whose favorite bird was an owl, and the Latin word cunicularia, meaning a miner or burrower. Other common names are Billy Owl, Ground Owl, Long-legged Owl, Prairie Owl, and Prairie Dog Owl.